The huge news today was the announcement of the $5 Raspberry Pi Zero. We thought it was important enough to spend a whole show talking about it, despite the fact that we released episode #8 yesterday.

We also spoke about the newly released Raspbian Lite.

A few of the things that came up on the show:

Raspi.TV blog and video announcement of the Pi Zero

The Raspberry Pi Guy video announcement of the Pi Zero 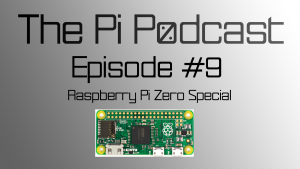