The first two episodes of Robot Wars have aired in the UK.

Kickstarter for a 12” GPIOZero Ruler.

10 Linux distros for the Pi

Hannah Mills is a teacher of computing in a special needs school and Pi certified educator. 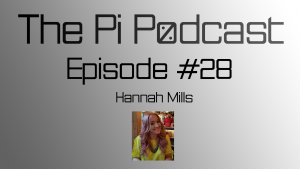 Unfortunately this is the last episode of The Pi Podcast. Although we have all enjoyed the last year of producing the show, circumstances have changed and we can’t commit to doing it any more.

We’d like to thank all of the fantastic guests who have given up their time to speak to us. Without them there would have been no show. We’d also like thank everyone who listened and to those who helped to spread the word about us.

There won’t be any new episodes but if you stay subscribed to the RSS feed, you will be the first to know about any similar Pi-related projects in the future. We can’t promise anything but you never know.

If you want to get in contact you can email show@, find us on Twitter or Facebook, leave a comment below or visit the following links to find out what the three hosts are up to now:

Joe will continue with his other podcast called Linux Luddites. He also has a website and reasonably active Twitter and G+ accounts.

Albert goes by the name of Winkleink. He blogs about his various Pi projects and has Twitter and G+ accounts.

Isaac writes articles for FOSS Force and has a twitter account that he doesn’t use much. He is also a regular on the mintCast podcast.