There’s only one thing to talk about: the Raspberry Pi 3!

We speak to Eben Upton in detail about what’s new and improved and what was involved in developing this new Pi.

Joe made a video comparing the speed of the Pi 3 with the Pi 2.

Ubuntu MATE 15.10 is available for the Pi 3 and the Ubuntu Pi Flavour Maker has been updated 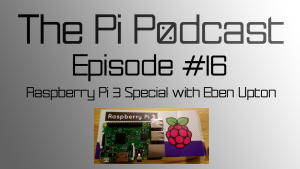